The history of the project started in the 1998, at an open-air near Smolensk. Dima Covex was playing techno from PC, Roma Scotch was making scratch-support for drum'n'bass set via old soviet vinyl player. They met there and decided to make music together.

In the city of Desnogorsk, where Smolensk Atomic Station is located, their first tracks appeared. Roma used to visit Dima’s work (there was the only computer that guys were able to use) and they were composing tracks right in working time. From the beginning of their collaborative work, Scotch and Covex also used a bass guitar, and afterwards they got Polyvox.

The program that they used for realizing their music ideas was “Magic Music Maker”. In its friendly interface all the tracks was presented in the shape of colored bricks — this fact made young men think about puzzles. So, two hip-hop listeners who used jazz samples very actively got the name for their project.

In creative enthusiasm the electronic duo was making about 40 tracks per month (most of these works, unfortunately, remains only on compact cassette tapes). They played at parties in Smolensk, but this was not enough for such a productive project. So, Dima started sending demo material to different music publishers.

After a while, Scotch and Covex received an answer from the St. Petersburg label Perforated Records. The label leader Anatoly Kovzhun before he met guys at the Funky Porcini concert (MAMA club) in 1999 thought that Jazzy Puzzles is a big band of seven participants is minimum. A complete album of Jazzy Puzzles (also the artwork) was prepared for publishing, but Perforated Records was closed suddenly.

After that Roma get aquainted with Mikhail Chak (he helped Jazzy Puzzles to release a track on the Subetage Records) and Ruslan Aliev, who included one of the compositions into his Zvezda Records’s compilation. But soon the group members were separated by case: Dima left St. Petersburg, Roma stayed in the city and began to perform as a DJ.

The project Jazzy Puzzles is suspended now. Roman keeps on composing under the pseudonym JazzDJ and preparing a new material with a group of soul mates called True Flavaz.

Listen to some music by Jazzy Puzzles: 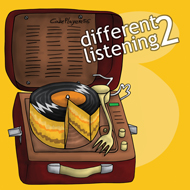 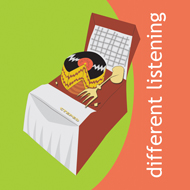 Different Listening
A compounding mixture of tunes that started the events and compilations series and became, for us, significant, epochal, legendary and sort of.