The only representative of the “depressive trip” music genre, delivering something sad, thoughtful, and gloomy at times.

The title of this music project was born by occasion: its author, Yuri Melnikov, came to Ivan Voltanov’s place (you know that man as Zimmer-G) and saw a picture, downloaded from the Web. On that picture (not a picture that you see right now here, but another) were drawn people with pillows in place of their heads. The inscription was like that: “people-pillows don’t need pillows because their heads look like pillows”. The project was just started and was planned to be about trip-hop — so, this name came in handy.

That was in 2001. From that time, as it often happens with non-commercial projects, the sound of The Pillow People drifted from a primary way. The style of the project described by its creator as “depressive trip” — something sad, thoughtful, and gloomy at times.

Yuri Melnikov is active and fertile composer, DJ and producer from Obninsk, near Moscow. He works in different styles under the different nicknames and titles. For instance, Yuri is known as Neuromancer (hardcore), Xyphazm (breakcore), and 50% of CVBS (minimal techno). As seen from text in brackets, music of these projects is hard and straight-out as well. The Pillow People varies from this line — maybe because of memories which are important here. Almost each track is dedicated to a certain girl.

Listen to some music by The Pillow People: 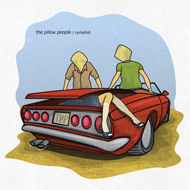 A set of musical dedications that are united by the mood they share, characterized by an absence of flippancy, along with slyness. Emotional keywords would be sadness and reverie.